Beginning today in the newspaper Daily adventure strip we will start to see something different with the Phantom fitting himself out with emergency medical gear plus some extra .45 ACP clips of ammo for this adventure.

We can only guess because of the extra care given pre-mission, we are going to experience an action-packed adventure coming up were he is expected to be needing medical attention and some extra ammunition throughout.

Before some get too upset, please note this is only for some stories and it is not a permanent costume addition or change.

To the right is a sneaky look at the Phantom wearing the full kit, which will come out on Thursday 25 April 2019. Huge thanks to Tony DePaul and Mike Manley for providing us this unique glance into the future.

Maybe our memory fails us, but we do not remember a previous newspaper or even Team Fantomen adventure with the Phantom running out of ammunition half way through the fight.

We even re-read the bloody battle between the Phantom and the Nomad's men in A Reckoning with the Nomad, which saw the Phantom outgunned, badly wounded and barely escaping with his life all without needing to reload his guns. He certainly could have also done with a medical kit along with the extra ammunition in that adventure.

The Phantom has been before shown in both newspaper and Team Fantomen stories wearing extra items above and beyond the normal minimalist look, including medieval boots, shoulder belts and even a cloak alongside with a sword that has been upgraded over time.

Attached below are two examples drawn by Sy Barry in past newspaper stories that Tony and Mike used for ideas on this latest slight upgrade. 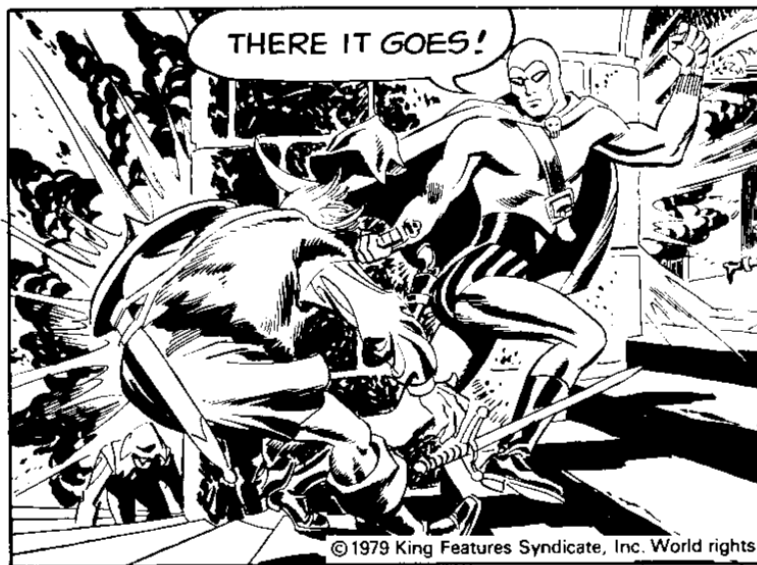 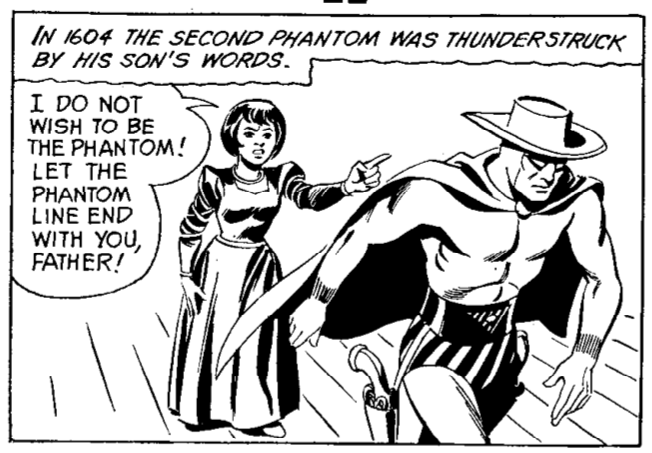 This is not the first time we have seen the Phantom accessorising, in the Golden Circle Avon novel, the Phantom is described as having accessories hidden in his belt. We are not yet at the level of the Phantom copying Batman with his accessory belt, or the 2009 SyFy Phantom, or the French/American-created Phantom 2040 series from 1994, but it's good to see the Phantom being prepared for what he expects to be a heavy upcoming battle.

In talking to Tony DePaul about the Phantom’s new accessories, he told us:

“Extra ammo, medical supplies… for old-timey river thugs, no problem, but we can’t expect the Phantom to fend off a terrorist militia with only 16 rounds of .45 ACP.

I started thinking about this when he was surrounded and getting the kitchen sink thrown at him after being lured into the body-double trap by the Nomad. I think he fired only three or four shots in the whole fight before he made a run for it, using up, at that time, all or most of what he had left, I suppose. So that’s why I started thinking, hmm… gotta fix this somehow.

And then he caught that piece of shrapnel in the neck, the bleed and all that…. The Phantom won't be wearing it in every adventure”

We asked both Tony DePaul and Mike Manley on the risk of the Phantom becoming a Batman and the possible backlash of the Phantom with too many accessories.

"I thought of him carrying a tactical bag, so he could preposition ammo and medical gear where he could get to it on a run. In fact, I wrote it that way at first. But it made things overly complicated and awkward.

I’m so, so very wary of adding gizmos to the Phantom’s bag of tricks, ala SyFy Channel (or Batman). If we added stuff like grenades or gas bombs, etc the problem is, then he’s Batman with the utility belt.

Whatever we do, safeguarding what makes the Phantom unique is paramount. His main weapon must always be the myth, the mystery, the legend. Then his guns. And, given that he bleeds like any ordinary man, we’ve got that covered now."

Mike Manley had this to say:

"The Phantom is not Batman.

The issue we face is how to update the character and keep the mythos in an era of the modern terrorists and armed thugs and criminals who now sport high tech, heavy military weaponry and the cellphone. Batman was always out of the shadows, using fear, mystery and his brainpower first. I think Kane and Finger got that from the Shadow and The Phantom.

It would be easy to have him roidded up and looking like a 90’s Image hero, all gun belts and straps.

It's a fine line to be sure because we try and appeal to readers like my father who read him as a kid in the 30’s and 40’s to modern readers who still find him and follow the adventures. Also I think the syndicate would balk at Tony and me turning him into Rambo.

So I was thinking light compact med kit with little Guran med packs for pain, healing etc. even a Bandar version of super-glue to close wounds, and extra ammo, but he’s a dead shot like Marshall Dillion—not a bullet waster. No submachine guns for him to just spray the enemy. Like a surgeon with his hand, knife or pistol, this way he might scar the chin but not kill."

It is obvious from the above comments, Mike and Tony have purposely restrained from accessorising the Phantom in a way that is too extreme, and they are very keen to keep the uniqueness and the mythology of the Phantom in tact. They are not dreaming up of ways to ruin the character.

Mike Manley was kind enough to send through some preliminary images of the accessories for the Phantom which you can see below. It will give you a unique view of the progress from sketches to finished product we see in the newspapers day to day.

While some may see the slight change to the Phantom costume as sacrilege, we don't. We would love to hear your thoughts on these new additions to the Phantoms costume for the occasional adventure. Do you like them? Do you see them as necessary or do you think this is a step too far? Let us know via email, social media or Jungle Drums.

We must say thank you to Mike Manley and Tony DePaul for the sneak peak into the future with these panels of the Phantom accessorising, and for answering all our pesky questions.