A huge honour to chat with Graham Nolan who is a modern day legend in the comics field with credits at both DC and Marvel and is mostly known for his Batman work including the co-creation of Bane, the villain in the world of Batman. As you will find out in the following podcast, there is much more to Graham Nolan that his Batman work including a legacy of the Phantom phandom passed on by his mother at a young age. Graham's Phantom work includes the Sunday newspaper strip adve
Jermayn

Following on from our The Complete Don Newton Charlton Phantom video review, we now review the first such complete compilation produced by Hermes Press. It was released back in 2016 and features the underrated artist Jim Aparo. Jim Aparo is best known for his time with DC Comics through the 1960s and 1970s, working on popular characters such as Batman, Aquaman and the Spectre. However, his first break into the comic book field came via The Phantom for Charlton Comics. He was
ChronicleChamber Team

They're the classic debates you'll hear wherever phans gather to discuss their favourite Phantom stories, characters, comics and collectibles. Do you prefer colour or black & white? Who's your favourite publisher? Who's your favourite artist? To spice up the conversation it's a Sophie’s Choice: we pose a Phantom question with only two answers. Once you've made your selection, the other is lost to you forever! We hope you enjoy the debates and leave you to ponder the questions
Dan

It's been 23 years since Series 1 was in stores, and almost three since the promo card came with Frew's 80th Anniversary Special, but finally - The Phantom Gallery - Series 2 trading card set is available for sale! Creator Glenn Ford is understandably relieved that his vision of over two decades has finally been realised. "It all got done - it's looking amazing, it's looking fantastic." he tells us in Episode #121 of X-Band: The Phantom Podcast. Glenn was speaking to Chronicl
ChronicleChamber Team

There is only a couple of weeks left to enter our competition for a copy of Don Newton's Complete Phantom, the beautiful volume published by Hermes Press. Celebrating one of the greatest American comic book artists of our favourite hero, it is a stunning volume and a must have for any serious Phantom phan. Valued at around $80AUD in your local comic store, this is a prize worth chasing. Of course, there is a catch... The competition is exclusively open to Patreon supporters o
ChronicleChamber Team

There might only be four Frew and three Egmont comic books for us to review since our last Comics and News podcast, but there's also a surprising amount of news for us to talk about! Perhaps the biggest Phantom event of the last few years leads the discussion as the phellas reflect on the successful Treasures of Drakon Kickstarter campaign. We also chat about: our Don Newton competition, Mythos in Brazil, what we know about Supanova 2019, and the additions to the Phantom's ou 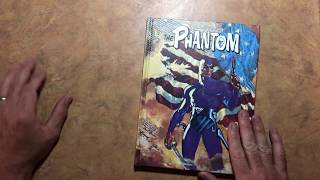 The Don Newton book published by Hermes Press has not disappointed! The collection of Charlton stories, essays, interviews and artwork gathers together the complete works of a man that many regard as one of their favourite Phantom artists. In the video review below, we look over Don Newton's Complete Phantom in detail. Fair to say we love the attention to detail that Dan Herman and the team have put into this volume. Make sure you watch to the end as we have a special competi 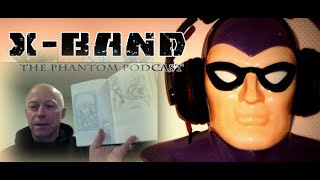 X-Band: The Phantom Podcast #112: An Interview with Douglas Klauba

In this episode we are honoured to be joined by one of the most distinctive Phantom cover artists going around - Douglas Klauba! Doug is renowned for his covers for Moonstone comic books in the mid-late 2000s, as well as the artwrk that has featured on so many Bradford Exchange products and now most recently, on a future Lightning Strike Comics issue. In a wide-ranging interview that starts with a video tour of his studio (keep an eye on our YouTube channel for the footage),
ChronicleChamber Team

In this episode we are honoured to be joined by one of the most prolific The Phantom Daily newspaper strip artists, and the only one to share his initials with our hero! Keith Williams picked up the strip after Sy Barry retired and, together with penciller George Olesen, worked on the strip from 1994-2005. In total, he inked 32 Daily stories and was at the helm when the 1996 Billy Zane film premiered. Post 2005, Keith also inked The Phantom stories for both Moonstone (the Cap
ChronicleChamber Team

Dan Herman is the owner and publisher at Hermes Press, the world’s leading producer of The Phantom books and comic strip reprints focusing on the art and artists. We’ve been lucky enough to have a chance to chat with Dan and ask him six quick questions about the current publications that Hermes Press have available. ChronicleChamber: Thanks so much for agreeing to join us Dan - we are big fans of your work! Your Phantom books are widely recognised as setting the bar in terms
Dan

FCBD Update: Is The Phantom "Sustained and Successful"?

A week ago we reported that, despite their commitment to the event over recent years, Hermes Press are not releasing a contribution to Free Comic Book Day 2017. ChronicleChamber has been in touch with Dan Herman, publisher of the American company, to find out why not. Dan Herman: "First thanks to everyone in the Phantom community for their support. Now onto what happened with FCBD. I reviewed my proposal with my account representative at Diamond, to reprint in its entirety,
Dan