The majority of phans will be aware of the Defenders of the Earth video game that was released for various home computers in 1990 and, of course, the arguably more famous Phantom 2040 game released for the Sega Mega Drive, Sega Game Gear and Super Nintendo Entertainment System in 1995. But did you know that the Phantom almost had a third console outing, along with fellow Lee Falk creation Mandrake the Magician, in 2003?

In the world of video games it is not uncommon for games to begin being developed only to be unceremoniously cancelled and never heard from again. Indeed, some games reach a near complete state with only the smallest of fine tuning left before the plug is pulled. The stories behind these cancelled games are many and varied but always fascinating. To help uncover the secrets of these two games, ChronicleChamber contacted Sebastiano Mandala, one of the founders of Italian video game design studio 7th Sense Studios who were tasked with developing the games.

Sometime before the later half of 2003 a small French video game publishing company called Microids had acquired the video game licence for The Phantom and Mandrake from King Features Syndicate. Microids hired 7th Sense Studios to develop games out of the two licenses which were planned to be released on Nintendo’s Game Boy Advance system in 2003. 7th Sense had worked previously with Microids on Game Boy Colour (the Advance’s predecessor) titles The Fish Files and The New Addams Family Series, both of which had been received well. “[The Game Boy Advance] was a natural evolution for us, since we were already Nintendo devs and we [had] worked on [the Game Boy Colour],” Mandala explains. However, Microids didn’t really know what to do with the properties. “They were quite clueless [about what they wanted, but] they were trusting us anyway.”

Development of The Phantom: Ghost Who Walks and Mandrake the Magician: Shadow of the Vehme was fairly quick, in all taking only 8 months. This was partially due to both games running on the same game engine. Mandala says that while the team had heard of the Phantom, they weren’t really familiar with either of the characters. “At that time we knew that Phantom was still famous only in Australia, otherwise basically no one really remembered the character. We knew the characters by name, but we didn't know the comics, so we weren't really fans, however KFS sent [us] a lot of material so we did enough research to develop the storyline and game design. ”

While the two games shared the same engine, they had slight variances in game play to suit the characters. The Phantom, for example, would have been an action-adventure game while Mandrake would see the top hat wearing magician use his powers of illusion rather than weapons to subdue foes and feature stealth elements. On his Projects page game coder Maciej Sinilo notes that Mandrake introduced some particular hurdles.

"Mandrake was a little bit more complicated [than the Phantom] because of his unique spells (he couldn't use a machine gun :). He could, for example, summon his astral body and sneak around in this form, walk through the walls etc."

Sinilo’s website offers some more interesting tidbits about the games such as the game engine having the ability to have up to 10 non-playable characters on screen at once with no hint of impact of performance - something rather impressive for the time -, and a scene in which an “Indiana Jones style stone [chased] the hero in one of the dungeons.” We presume this hero would have been The Phantom.

Going over the two games’ design documents reveals further differences between the two games. Obviously the main difference between the two from a gameplay perspective is the story. The Phantom’s story revolves around a plot to destroy a pharmaceutical company that has set up research labs in the jungle. When one of the labs is sabotaged and explodes, killing a young Bandar tribesman, the Phantom is asked to investigate by the young man’s father leading to a mystery involving industrial sabotage and ancient evil. Mandrake's story, interestingly and perhaps appropriately, is set during World War II and sees Mandrake investigate the murder of an old friend. This friend happens to be an archaeologist who has discovered some ancient objects of power which, of course, the Nazi’s want for themselves. His investigation sees Mandrake travel all over the world in his search for the truth.

The games’ engine was robust enough to allow the two titles to embrace the two character’s differences. As previously mentioned Mandrake would not use guns in his game, but rather various spells and abilities to subdue foes. While the Phantom could use guns (or hand-to-hand combat if the player wished) the developers cleverly had human enemies drop to their knees and surrender once they had taken enough damage. While surrendered the Phantom can question these enemies to gather information to aid him in his mission. While it is possible to kill a surrendered enemy the game would penalise the player for doing so. This is a very clever way of embracing the Phantom’s “do not kill” philosophy in a way that makes sense within the game. For his own part, Mandrake had a similar ability, although he would hypnotise subdued enemies to gather information.

A strong part of both games is exploration and both titles present a slightly different way of doing this. The Phantom is able to enter a “stealth mode” which sees the character crouching and sneaking around the villains’ base, just as in the comics. Mandrake, on the other hand, has the ability to become invisible, however, any kind of attack or interaction on Mandrake’s part would break this spell. The Astral Body which Sinilo mentions would allow Mandrake to pass through walls, but he can not attack in this form. Further, Mandrake’s physical body would be left defenceless in this form so players would need to use it warily.

While development of the two titles ran smoothly, the worst happened at the 11th hour. Just as the games were being made ready for release Microids declared bankruptcy. Due to being tied up with Microids this also spelled the end for 7th Sense. So, exactly what condition were the games left in after they had been abandoned? According to Mandala, they were at least in a playable state. “I think the games were good enough, but surely not gems. I wasn't very happy with the art, but the games were nice. They had to be made both in 8 months and there were only around 10 people working on them.”

Although the games may have never been made available commercially, hope is not lost for those who might wish to play them. ROMs of the games do exist, so all one needs is a Game Boy Advance emulator to play them on your home computer. The games were never translated from 7th Sense’s native Italian, however, making them quite hard to play for those who don’t speak Italian due to the games’ emphasis on story. Still, you can have a bit of a play around within the first area of both games without too much trouble and get a decent idea of the games.

In playing the ROMs, after the impressive intro screens to each game, it easy to see what Mandala meant when he said he was not happy with the art. While the game’s environments do look quite nice, the character sprites appear rather rough and pixelated, as if unfinished. While Mandrake seems to fare better, the Phantom, perhaps due to the single colour of his costume, looks quite bland. Strangely, it also feels as if he gets lost amongst the green visuals of the Deep Woods, something one would not expect a purple-clad character to do. Indeed, the graphics seen in-game appear far inferior to the examples given in the design documents. Mandala explains this in part by saying due to the time constraints of development the team opted for prerendered 3D art rather than the preferred pixel art that was more commonly used.

However, where the game does shine is in its music. The music in both games feels suited to the character it is based upon. The Phantom’s soundtrack mixes jungle drums with rock while Mandrake’s soundtrack is suitably mysterious. The sound effects, too, are good during the small amount of the game I was able to play.

While I can’t say how all the various game elements and character abilities fare over the course of the games, during the short amount I was able to play everything seemed to work and flow well for the most part. The isometric perspective makes movement a little tricky; I found I had a bit of trouble when engaging enemies and trying to have my hero face exactly the right direction while attacking. Still, this may be due to paying the game on a wireless XBox 360 controller via my computer rather than the actual GBA hardware, although I did use the 360’s d-pad which is superior to the one found on the GBA.

Regardless, the true revelation here is the fact that so much material on these games - as well as playable ROM dumps of the games themselves - actually exist. It is extremely exciting to be able discover so much about these games for which, until recently, all we had were a few screenshots and arbitrary information thanks to Unseen64. It is a shame that these games never saw release as they show a lot of promise. It is arguable that in the early 2000’s they may not have sold well, but sales do not always reflect the quality of a product. Either way, a piece of Phantom and Mandrake history previously shrouded in mystery has been uncovered and that is incredibly exciting!

ChronicleChamber would like to thank Sebastiano Mandala for his help with this research and providing all the game documents and ROMs. 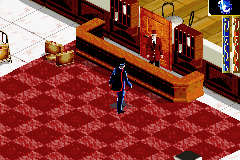 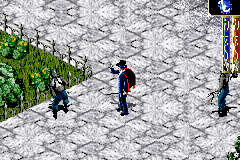 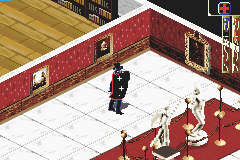 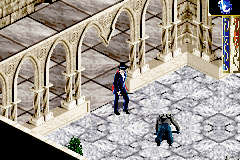 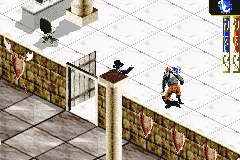 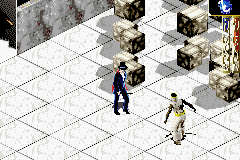 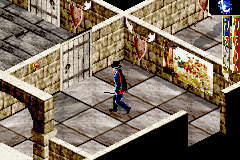 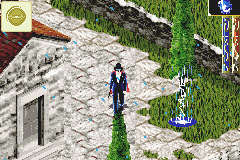 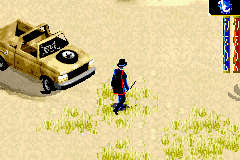 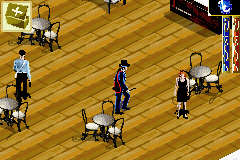 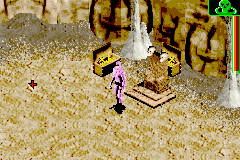 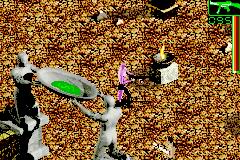 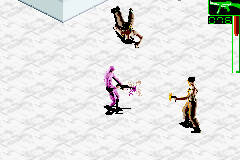 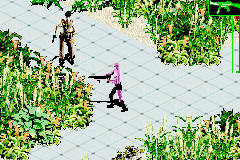 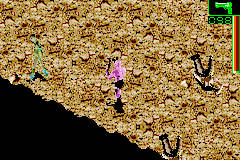 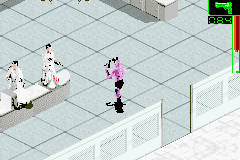 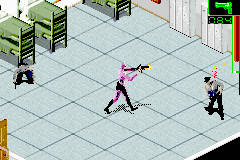 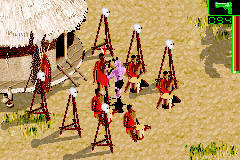 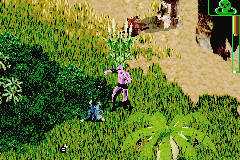 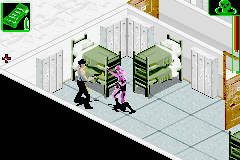 Sebastiano has kindly given ChronicleChamber copies of the design documents, a series of screenshots and concept sketches as well as the ROM dumps of each game for phans to enjoy. All of this can be downloaded from the below link. When using the Game Boy Advance emulator, VisualBoy Advance, you may wish to configure the game's controls by going to Options > Joypad > Configure > 1.

These documents have been uploaded to the Phantom Preservation Project.